The Pierre Police Communications Division, also known at the Central SD Communications Center is a state-of-the-art law enforcement/public safety communications center. The center is operated by a team of highly trained and certified staff consisting of fourteen Communications Officers, and one Communications Manager.
​
​ The Central SD Communications Center is the Public Answering Point (PSAP) for five counties in central South Dakota. The dispatch center consolidated the PSAP with the former Pierre State Radio in July 2014. This has expanded the center’s duties and responsibilities to now include dispatching services for many State and Federal agencies in the central and eastern portion of our state. The CSDC 911-Dispatch center also relocated from the Solem Safety Center to the George S. Mickelson Building.
​
​ The Central SD Communications Center not only receives 911 calls for the five counties, it also coordinates emergency and non-emergency radio, telephone and teletype communications for law enforcement, ambulance, and fire/rescue for all 5 counties and their respective cities within the counties.
​
​ In addition to answering 911, the Communications Center also handles non-emergency calls for the City of Pierre, Pierre Police Department, Hughes County Sheriff’s Office, Stanley County Sheriff’s Office, and the Sully County Sheriff’s Office; State agencies including the South Dakota Highway Patrol, Division of Criminal Investigations, Game Fish and Parks and Department of Transportation and other state agencies; Federal agencies including the FBI and the US Marshal Service and various other agencies.
​
​ For all that is accomplished by the communications center, the highest of our priorities are officer and public safety.
​
​ Return to Police Home Page 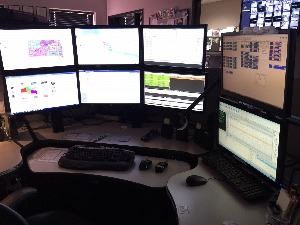